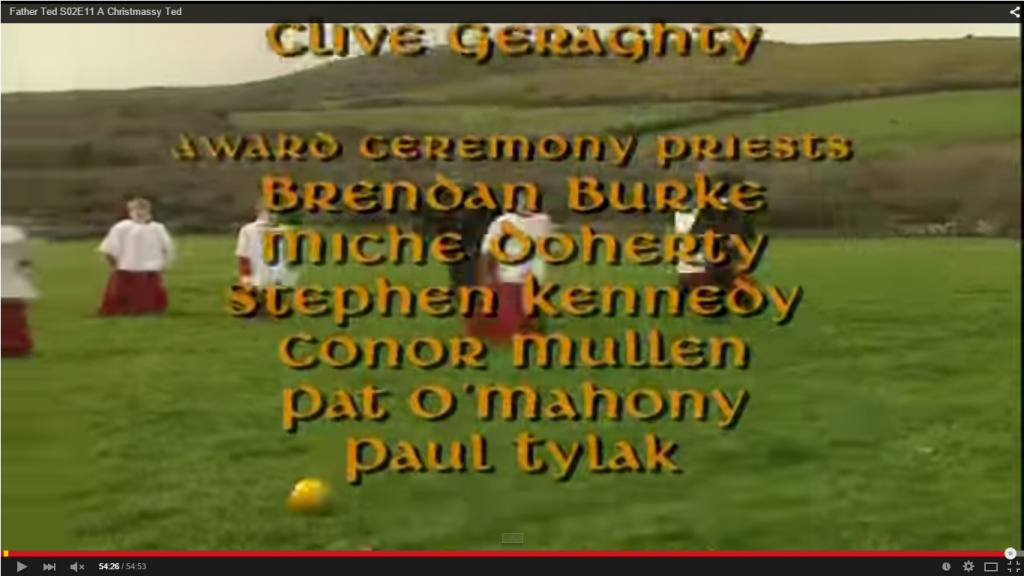 Every half-assed chancer in Ireland and their dog has a Father Ted story.

And I’m no different.

As many of you might already know, last Tuesday, April 21st, was the 20th anniversary of the first broadcast on Channel 4 of the gloriously irreverent and regularly side-splitting, three-season comedy series.

All wings of the media weighed in with deserved tributes and I was personally delighted to have played a small part in hooking up RTÉ Radio 1’s John Murray Show with Pauline McLynn – the incorrigible Mrs Doyle – on Tuesday morning to reminisce on the series’ lasting appeal.

Others, such as Donald Clarke in the Irish Times and Andrew Harrison in The Guardian, have written far better than I ever could on the reasons behind Ted’s success and long-lasting appeal, while numerous compilations and quizzes were put together last week in honour of the anniversary.

I’m guessing though that very few of you reading this know that many years ago yours truly was actually in Father Ted…well, almost.

It all began one late summer’s afternoon in 1996 while I was waiting to meet a mate outside Bewley’s iconic café on Dublin’s Grafton St.

There I bumped into an old friend I hadn’t seen in a few years, Greg Kyle, who I was vaguely aware was involved in the movie biz somewhere.

Greg and I got chatting and he told me he was just back from Istanbul where he’d worked with the Hubbards, helping them cast Alan Parker’s Evita.

No doubt at this stage I regaled him with my oft rolled-out tale of how,  via Hubbard Casting, a few years earlier I very nearly got the role of the guy from Eejit Records – eventually played by comedian Sean Hughes – in Parker’s hugely successful Dublin-based The Commitments (a story I’ll keep for another day here).

Anyway, at some point Greg turned to me and asked if I’d ever wanted to be a priest. Of course like every other Catholic-born Irish male – right, guys? – as a kid the thought had, from many years of religious indoctrination, regularly occurred to me; but I’d eventually gotten over it.

Somehow however I didn’t think this was what he had in mind.

It wasn’t. Hubbard were, he explained, casting for the Father Ted Christmas Special we’d all been hearing about and would I, he asked, be interested in coming along to a casting session the following week?

Would I what?! Remember at this stage Father Ted was two series old and anyone with a television knew how brilliant it was. To be a part of Father Ted, especially for a non-actor like me, would be ridiculously fantastic.

And so a few days later I found myself in a grubby wee room in Temple Bar standing at one end of a semi-circle of gentlemen pretending to be priests reading to Greg, Ted’s two writers, Graham Linehan and Arthur Mathews, and, I think, director Declan Lowney, all of whom I knew socially.

Possibly because I was only doing it for a laugh and was under no career advancement pressure I had a blast and left without really worrying how I’d done.

You can imagine how surprised I was a few weeks later when I got a call offering me the role of a priest at some awards ceremony in the show. I was delighted.

I was even more delighted to spend a couple of days later that month down in Ennistymon in Co Clare hanging out with the Ted cast and crew as they shot the award ceremony exteriors at nearby Glanquin House, better known as Craggy Island’s parochial house.

I spent day one mostly sitting around, trying to stay out of the way while still observing how things were done in TV drama, as well as chatting with old friends and making some new ones. I may well have been involved in some crowd scene shots, I don’t remember – hell, it was almost 20 years ago – but as we headed back to the hotel that evening I knew tomorrow would be my big day.

And sure enough, late that afternoon I was beckoned forward for my very brief two-line moment in the thespian spotlight. I was the priest in charge of security and held a very important walkie-talkie to bellow into as required.

As everyone began to set up around me, however, I suddenly became very uncomfortably aware of being the complete centre of attention, not of a small two- or three-person TV team, which I was used to from all my years as a presenter, but of a huge drama production crew.

Dozens of eyes were now on me. And I hate to say it, but I went to jelly.

Try as I might, I just couldn’t deliver my two pathetic lines in anything resembling a believable fashion, even when they asked me for a ‘cursing’ version of one which, you’d imagine, I’d have been right at home doing.

And then, as quickly as it began, it was all over. Declan called cut, I handed back the walkie-talkie, strolled back to where I’d been sitting beforehand and that was that.

Some months later my initial suspicions were confirmed when I got a letter from Hat Trick, the production company behind Father Ted. In it they said that they had tried every combination of edits but just couldn’t get my lines to fit time-wise and that I hadn’t made the final cut.

I was disappointed but not gutted. I wrote back saying not to worry, that I was often involved in dropping people from television and radio programmes and that it wasn’t like I was a professional actor dependent on work like this anyway, but had only done it for the laugh.

If they’d dropped me as a presenter on a show, I said, well that would have been a very different story.

And, I added, if it was because of time and not because I was rubbish, sure they’d have me back sometime in the next series.

Here’s the real rub: whatever contract I signed, my name is still in the credits at the end of the episode – for years younger relatives would get a kick out of trying to spot it as it flew past in a blur – and up until recently I still got albeit small cheques from Channel 4 every year for repeats and international sales.

This entirely undeserved bit of annual income always made me laugh.

So what really happened? Was I that bad or were Hat Trick genuinely not able to fit me in?

I found out about three years later.

I moved to London in 1998 and, amongst other things, quickly established a motley crew of ex-pats who could be relied on to gather in some watering hole or other whenever there was an Irish international footie game on the telly.

At one, both Graham and Arthur turned up.

After the game a bunch of us stood around catching up and the topic of Father Ted perhaps unsurprisingly reared its head. This was the first time I’d been in the company of its two writers since my inauspicious on-screen acting debut a few years before and of course I couldn’t resist.

“So guys,” says I, “how come I didn’t I make the Christmas special final cut? Was it as Hat Trick suggested, a matter of running out of time, or was it, as I strongly suspected, because I was shite?”

In unison both turned and without missing a beat or a hint of malice said, “Oh yeah, you were shite.”

It was a beautifully honest, funny-as-hell moment.

And no, they never did call me back for series 3. 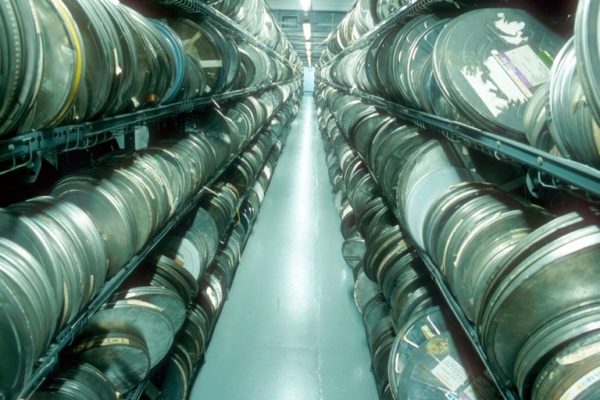 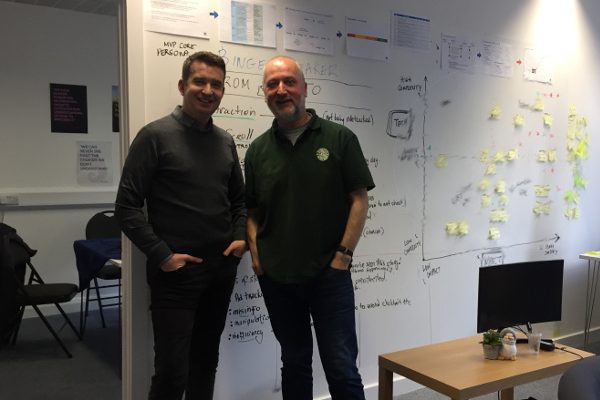