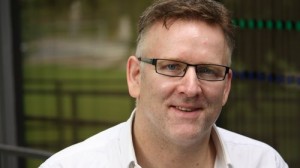 broke his neck while diving at Dublin’s 40 Foot. He’s been a wheelchair user since.

I’ve known Olan since 1984 – he was a year behind me in the Communications Studies course in NIHE Dublin (now Dublin City University) – and I was one of the first to get a call after the accident and to see him in the Mater hospital in the hours afterwards.

15 years on from that fateful summer’s day, in One Evening In July Olan looks back at the accident itself and all that’s happened since, both to him and those he met while in hospital at the time, and contemplates his life today.

This is a very personal journey for Olan. Along the way he recalls what life was like for him before his injury, how it dramatically changed that day with one careless dive and how he subsequently has come to terms with being a wheelchair user.

He revisits the 40 Foot for the first time since his accident to see what he remembers of the day itself. He calls in on the National Rehabilitation Hospital where he had to retrain his body and mind for everything that lay ahead. And he meets up not only with some of the wheelchair-using friends he made during this period to compare their experiences with his, but also with someone whose recent spinal injury has meant they now are starting out life as a wheelchair user. 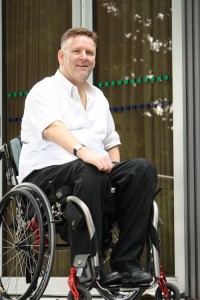 g In July is a fascinating and revealing voyage of discovery. It’s full of mixed memories of times past, of exhaustive efforts to do the ordinary stuff non-disabled people take for granted, of dark humour necessary to get through each day and of hope and optimism for the future.

It’s an emotional and informative trip for anyone who has ever had to deal, directly or indirectly, with serious disability.

“Pat O’Mahony’s absorbing Documentary On One: One Evening In July (RTE Radio 1) rewound 15 years to revisit the accident and its aftermath. McGowan himself has coped admirably with the appalling setback.”
Sunday Business Post, 25th July 2010

Everything Must Change – Off Message 22 – As a freelancer you get to work on a whole variety of different gigs. Occasionally you’re lucky enough to be part of something significant – in which Olan makes a brief appearance.