In Pat’s University Challenge, my first documentary for the RTÉ Radio 1 Documentary On One strand, I went back to Dublin City University 20 years after it had become a university to see how the place had changed since I was a student there back in the mid 1980s when it was but a humble National Institute of Higher Education in Glasnevin, D9. 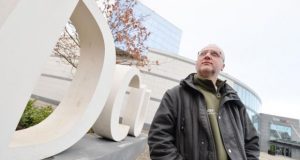 Living on campus for the duration of Freshers Week I was greeted head on by the huge physical changes that had occurred while I’d been away, but I was far more curious to see if the attitude of place has changed.

And I was particularly interested to gauge how staff and students were now dealing with life in Ireland’s youngest university in these economically unstable times.

“And while trips down memory lane can often be self indulgent, trite and boring, this one struck the right balance of nostalgia, curiosity and a wry, mature take on modern Irish youth…. What I liked most about Pat’s University Challenge was its general good-natured air.”
Irish Independent, 28th November 2009

Mentor As Anything – Off Message 25 – Since  I’ve participated in DCU’s annual mentorship programme. Here’s why: if I’ve passed on even the occasional useful titbit, it’s job done.

Get Lucky – Off Message 13 – Remembering an incident from my time at DCU, some career advice: in media or any other business don’t ever underestimate the importance of luck; likewise don’t over-estimate the role of your own talents and hard work.

Happy Anniversaries – Off Message 9 – There were quite a few varyingly significant personal anniversaries in the air back in 2014, including becoming Entertainments Officer in DCU. Some were more significant than others. All had a story to tell.