Reporters At War was a three-part (four in the US and elsewhere) Emmy and Broadcasting Press Guild award-winning series I originated and produced with True Vision that took a long hard look at one of the most dramatic and dangerous careers of modern times, that of the war correspondent.

More than 300 journalists were killed in battle zones in the dozen years before Reporters At War was produced in 2003, some 200 of these having been deliberately targeted by their killers. The War in Iraq, which had just began when the series was commissioned by Discovery UK in April, had an initial rate of attrition – 15 journalists dead (plus 2 missing) in the opening 26 days – that was the highest ever. Though 63 died in the Vietnam between 1963-1975, at the above rate around 4,500 journalists would have died if the Iraq conflict lasted as long as the Vietnam War.

Then there’s the psychological trauma of witnessing the brutality of war close-up, constantly, day in, day out, over long agonising periods of time. No wonder nervous breakdowns, marital break-ups, alcoholism, etc affect war correspondents to a degree never experienced by most ordinary folk. 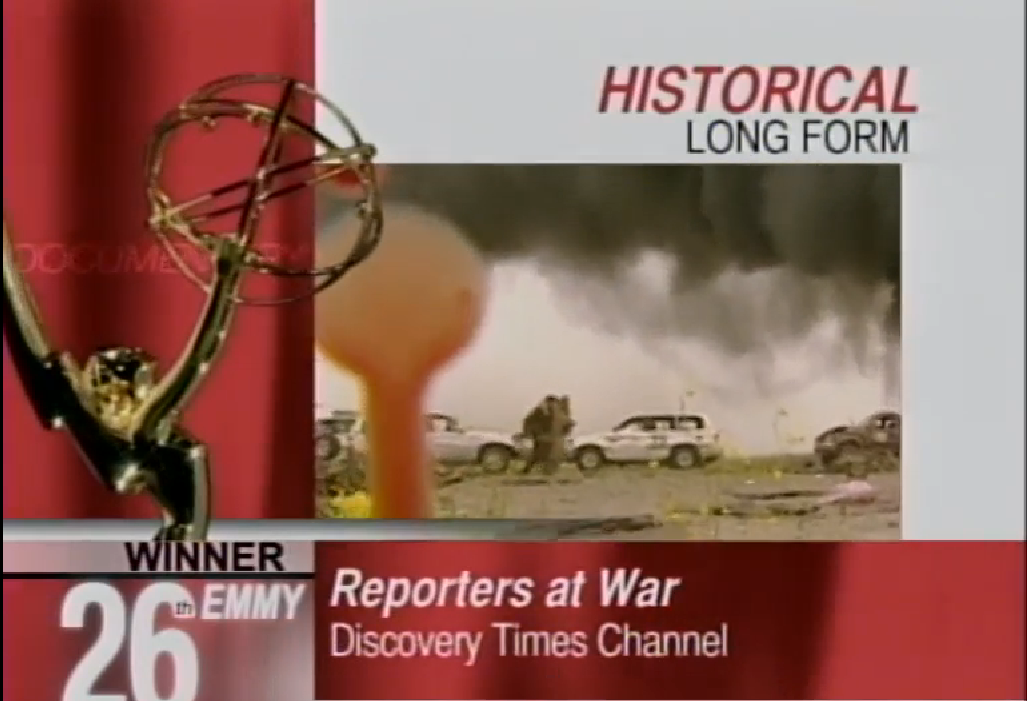 Reporters At War also examined the ever-changing circumstances that the war correspondent must file their stories under and the evolving technology that is supposed to make their job easier…that, at least, is the theory. It also looks at some early examples of how technology aided and abetted the faking of war newsreel footage, the impact that television may have had on the outcome of war and the pressure that reporters now find themselves under in the satellite-driven, 24-hour rolling-news era.

Finally, it’s often been said that truth is the first casualty of war. Thus the series went behind those well known, iconic stories and images from modern war journalism to scrutinise how such factors as patriotism, censorship, impartiality, propaganda and taste impact on the stories that we get to read, see and hear during times of conflict. If the journalists themselves are rarely happy with what passes for news in such circumstances, how can we ever believe their blood-stained dispatches from the front?

Reporters At War was a co-production between Discovery UK and the short-lived Discovery Times, a digital New York Times Television and Discovery Communications joint venture, since re-branded as Investigation Discovery.

Watch part one, Dying To Tell A Story, part two, Bringing It All Back Home, and part three War, Lies and Videotape here.

And The Award Goes To… – Off Message 40 – When the media-mad Off Message won a 2017 Irish Blog Award I was of course delighted, but wondered if winning an award like that or the Emmy we won for Reporters At War has any real and measurable impact on one’s career. It’s tricky to quantify.

New York State Of Mind – Off Message 23 – 10 years on from Reporters At War winning its Emmy, in 2015 I remembered how I hoped it’d help me get to spend some real time in NYC. It didn’t. I blame Steven Spielberg…kinda.

Dispatches From The Frontlines – Off Message 10 – In this social media era when images of the full impact of war are but a click away should editors still try to protect us from its brutal horrors? I’m not sure.

Happy Anniversaries – Off Message 9 – There were quite a few varyingly significant personal anniversaries in the air back in 2014, including the US transmission of Reporters At War. Some were more significant than others. All had a story to tell.

Simply The Best – Off Message 2 – As a freelancer I’m constantly thinking about what makes a successful idea. And in most cases, especially for long running formats, simplicity is the key. In fact, I thought Reporters At War was too simple.