For eight weeks during the late summers of 1996 and 1997 (and briefly in January 1998) I filled in for Andy O’Mahony (no relation) on The Sunday Show, a live Sunday-morning news and current affairs programme.

At the time no one was more surprised than me to be asked. Two things I clearly remember:

1. Being on air the morning Princess Diana was killed and having to react to updates as they became available; and

2. Making a gag about cocaine on only my second show while broadcasting from RTÉ’s Limerick studio which garnered me a daft “Fury Over Coke Joke” front page headline the following morning in The Irish Sun, bless ’em (which naturally I subsequently framed).

Here’s a short mix I put together from some cassette tapes I found a while backof me presenting The Sunday Show in 1997 and 1998:

I don’t remember a lot about the couple of weeks holiday fill-in I did for Des Cahill – until I started researching this I could’ve sworn it was Ray D’Arcy who was the normal presenter…old age, huh? – on his 1996 Saturday morning show, Talk Radio. 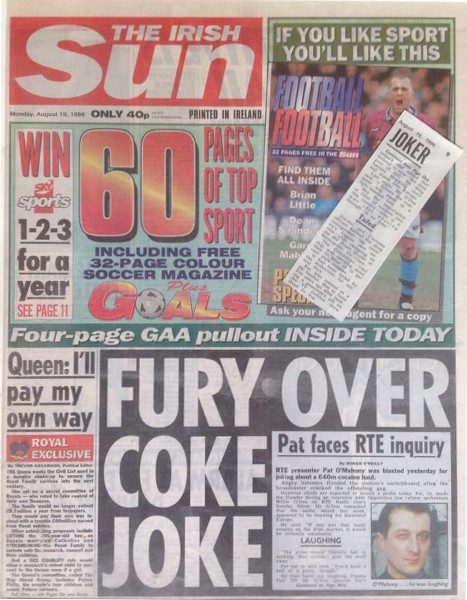 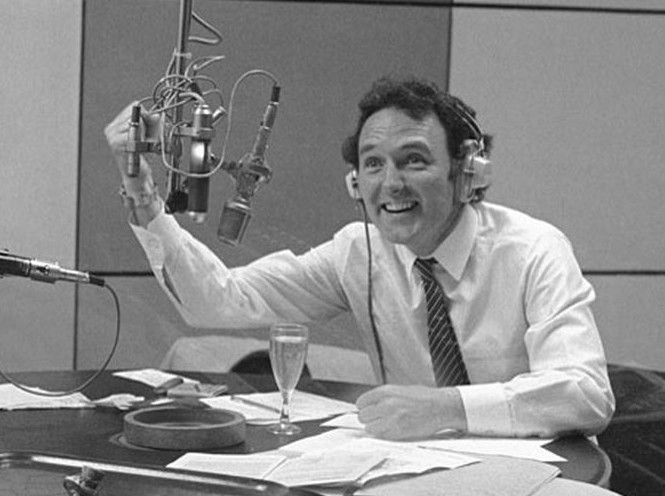 However, the week Irish swimmer, Michelle Smith deBruin, won her three gold medals in the Atlanta Olympics stands out. We planned to dedicate an entire tribute show to her that Saturday, July 27th, 1996, thinking at the time even as we went home on the Friday evening when she had one race left that however she did in it – she got bronze – it was still a truly remarkable experience.

Our plans were thrown into disarray the following morning when, only a few hours before we went on air, we heard about the bomb in a park in Atlanta that, as we found out during the show itself, killed two people.

As soon as I arrived in we decided we had no choice but, rather than drop the tribute and concentrate solely on the bomb, to combine both somehow in the show. And we did. We had to get people out of bed in Atlanta and literally make it up as it went along. Despite the tragic circumstances I still remember it as one of the most invigorating and rewarding live programmes I’ve ever presented.

Presented by Alan Corcoran (now on South East Radio), Ireland Tonight was a late-night magazine show dealing with issues relating to the Irish diaspora. I filled in for Alan for a few stints during 1995.