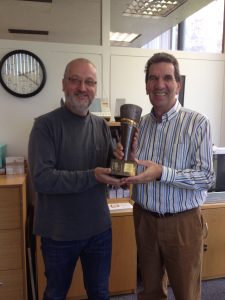 I produced RTÉ Radio 1‘s entry for the 2011, 2015 (winning) and 2016 Station of the Year Award at the PPI Radio Awards (now the IMRO Radio Awards) which each year celebrate the art and skill of Irish radio production and programming.

Every weekday afternoon Joe Duffy takes the pulse of the nation on RTÉ Radio 1‘s long-running phone-in show, Liveline. I produced on it regularly from 2013-2016.

The Marian Finucane Show is a weekend mix of news, interviews, reports and discussion. I provided holiday cover in August-September 2011 and again early in 2016.

The Ryan Tubridy Show is a fast-paced, entertaining and informative sixty minutes of morning radio. I produced on it for its opening two weeks in September 2015.

The John Murray Show was a daily morning show featuring a mix of entertainment, human interest and lifestyle. I provided regular producer holiday fill-in relief from 2010 until it came off air in June 2015, as well as for its two immediate temporary replacements, The Brendan O’Connor Show in July, and Mornings with Dave Fanning in August and September.

The Marty Morrissey Show was a daily afternoon chat show in January 2015 I produced on that for four weeks looked after the 3.00-4.30pm slot after Derek Mooney finished the previous December and before Ray D’Arcy took over in February.

Songwriters was a one-off broadcast pilot that investigated some of the themes and techniques involved in creating music. Presented by Paddy McKenna, featuring Delorentos and produced by yours truly, it went out in early January 2015.

Mooney was a daily afternoon chat show which I produced on at various times from May 2013 until it came off the air in December 2014.

The Late Debate is a nightly debate and analysis of all the news and political stories of the day. In June 2013, when Audrey Carville presented, I produced the show for a few nights. In January 2011, when Claire Byrne was out front, I produced nightly general election social media packages for two weeks in the build up to the election.

And The Award Goes To… – Off Message 40 – When the media-mad Off Message won a 2017 Irish Blog Award I was of course delighted, but wondered if winning an award like that or the one RTÉ Radio 1 won in 2015, the entry for which I produced, has any real and measurable impact on one’s career. It’s tricky to quantify.

Changing Times – Off Message 30 – Leaving RTÉ Radio 1 in early 2016 at the end of another long run there without a gig lined up to go to anywhere else anytime soon and oddly I wasn’t too worried, which as a freelancer is a very weird feeling.

Everything Must Change – Off Message 22 – As a freelancer you get to work on a whole variety of different gigs. Occasionally you’re lucky enough to be part of something significant.

Enjoy The Silence – Off Message 21 – It was an odd few months while in RTÉ Radio 1 not being able to post on social media about the 2015 marriage referendum. Instead I just shouted at my telly, radio and laptop.

Unlicensed To Thrill – Off Message 17 – When Radio Eireann had a monopoly on Irish airwaves pirate radio was the only realistic outlet for the majority of folk with any broadcasting ambitions. Including yours truly.

It’s Beginning To Look A Lot Like Christmas – Off Message 16 – The festive season is a particularly weird period in TV and radio land. My time in RTÉ Radio 1 was no exception.

Pole Position – Off Message 4 – Programme stories that tap you on the shoulder when you least expect it are often the most interesting. While producing on RTÉ Radio 1‘s Mooney in 2014 I chanced upon just such an unanticipated gem.