Richard Nixon, the 37th President of the United States and the only one to resign the office, visited Ireland from October 3rd-5th, 1970.

I clearly remember the visit because I was actually an eyewitness to one of Nixon’s major stop-offs, lining out with the rest of my 4th class schoolmates in my home town of Kildare, to catch a momentary glance of the President and his wife, Pat – herself a Ryan of Mayo stock – as they arrived to watch some local Irish dancers in the town square.

But also because of a black and white photograph from the day that made one of the national newspapers of Tricky Dicky shaking hands with my kid sister that has long since been on public display in the O’Mahony Kildare household.

However there was much about Nixon’s trip that I didn’t know. At the time, for example, I’d no idea Nixon was only in Kildare on his way back from Timahoe in the north of the county to visit where his Quaker ancestors, Thomas and Sarah Milhous, had left for Pennsylvania in 1729.

And to this day I’m amazed at the number of Irish people who have no memory at all of the visit.

So, four decades on, I was curious to piece together a fuller picture of a significant moment in Irish history that has been largely forgotten, overshadowed in our collective memory particularly by the earlier visit of Nixon’s great archrival, JFK.

In The Forgotten Visit I went on a very personal journey, not only casting my mind back to how I as a naive 9-year-old welcomed with childlike excitement the soon-to-be-disgraced US President, but also, in the company of various eyewitnesses, historians, protestors and broadcasters, for the first time explored how they remember the visit and the wider circumstances in which the trip occurred, including how these memories compare to recollections of the other US presidential trips to Ireland, and how people have since individually dealt with Nixon’s subsequent fall from grace.

I also wondered about the power of the Irish-American lobby, past and present, and how any US politician worth their salt knows how important it is to woo them.

A trip that takes in the four major locations of Nixon’s 1970 visit – Kilfrush House in Limerick, Timahoe in north Kildare, my hometown of Kildare, and Dublin – The Forgotten Visit is – or so it says here – a unique and revealing tale of savvy politics, well researched genealogy and largely more innocent times.

Production supervision was by Liam O’Brien.

“RTE’s documentary about Nixon brought forward an unexpected eyewitness in the form of broadcaster Ray D’Arcy. He was six years old when the president’s cavalcade rolled through Kildare, and he stood with his classmates waving American flags supplied by the nuns. Then they trooped back to class. It summed up the differences between Kennedy and Nixon. Kennedy came to Ireland and the whole country shut down; for Nixon, the children got an hour off school.” – Sunday Business Post 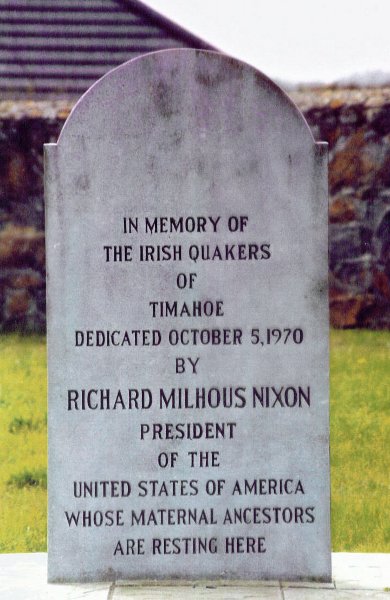 Nixon’s ‘forgotten visit’ to be recalled in documentary – Irish Examiner

Back to the future for organic food review – Irish Examiner