You Couldn’t Make It Up is a unique comedy news panel show format.

In each show two teams of comedians are let loose on all the week’s news, whether major or minor, serious or less so, to analyse, debate and/or ridicule it as they see fit.

For the last act both teams are assigned characters, quotes and scenarios plucked from the opening rounds which they then had to incorporate into a pair of irreverent sketches to perform as the climax to the show.

Series 2’s 10-week run on Newstalk was recorded in front of a live audience on Thursday evenings in January-March 2019 in Tramline in Dublin city centre. Free tickets were available via the show’s Eventbrite page.

Series 1 between December 2013 and February 2014 was recorded in DCU’s Helix Theatre.

You can listen back to all previous 20 shows at Newstalk or on iTunes.

Both runs of You Couldn’t Make It Up were Firebrand productions funded by the BAI Sound & Vision scheme, the first being in association with Vodafone, the second with Tesco.

More You Couldn’t Make It Up pictures can be found on the show’s Facebook page. 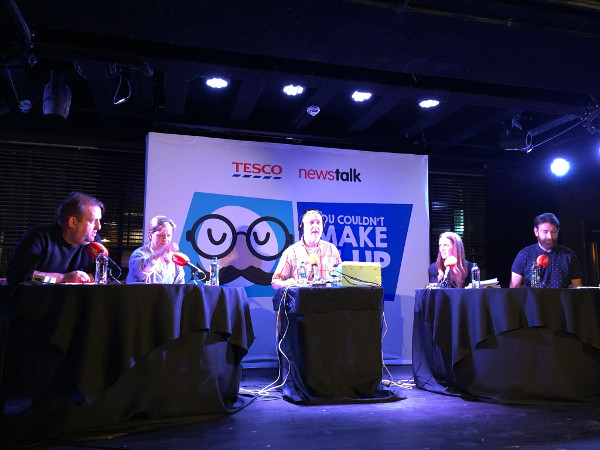 You Couldn’t Make it Up started life as What’s The Story?, a one-off broadcast-pilot comedy news panel show we made for RTÉ Radio 1 that went out in January 2102, having piloted it extensively off-air throughout 2011.

The broadcast-pilot was presented by Theresa Lowe, with team members Simon Delaney and Tara Flynn, and Colm O’Regan and Ciara O’Callaghan.

Radio 1 eventually passed on the format and it was subsequently picked up by Newstalk as You Couldn’t Make It Up.

It’s Beginning To Look A Lot Like Christmas – Off Message 16 – The festive season is a particularly weird period in TV and radio land. You Couldn’t Make It Up in December 2013 was no exception.